The word home means different things to different people.  To some it’s a house, to other’s it’s family and to still others it’s an entire country.

My next “home” was away at college at Virginia Tech.  When I think of this home it isn’t one particular dorm room or house, but the whole community that is there.  I made friends while at college that I still have today.  I married my husband while in college.  I have my first child while in college (that’s another story all together).

Our most recent “home” before the current one was in Lynchburg, VA.  This was where our 2nd and 3rd children were born.  This is where many of our friends live.  This was “home” for 7 years.  This was where I received my rose bush.

When we first moved into our home in Lynchburg, there was a lovely wild rose bush outside of the side porch.  When I say wild, I don’t mean that it grew there wild, I mean that at some point, it had been planted, and then later on, left to it’s own devices.  This rose bush was taking over the side porch – to the point that we really couldn’t go out that door.  We used the front door so that part didn’t matter, but a lot of the yard was overgrown due to neglect of the previous occupants.  So while taming the yard it was determined that the rose bush needed to be trimmed back.  I wasn’t part of this conversation, but it doesn’t really matter.  I soon discovered this wild rose bush had been pruned back to a very small, very neat looking plant.  I had really liked my wild rose bush and I wasn’t really happy.  Unfortunately, neither was the rose bush.  Despite assurances that it would grow back, the rose bush never did recover.  I did – after all we had a nice home, a wonderful family and great kids.

We moved from Virginia to Pennsylvania in August of 2011.  It was hot!  I didn’t want my poor little rose bush to have to suffer in the moving van so it traveled with the kids and myself to my parents house where we were staying for a month until the house we were buying was ready for us to move into.  When the kids and I left my parents house and drove up to PA for the move, the van was quite full so I didn’t take my rose bush at the time.  Each trip back to mom and dad’s or to Lynchburg I planned on taking my rose bush, but there was always a reason that I wasn’t able to take it with me.  Mom and Dad offered to bring it up with them when they came for Thanksgiving, but we were worried that the cold in PA would be too much of a shock to the plant.

This summer (2012) came around and my rose bush was still at my parents house.  Here’s the thing – it wasn’t doing well.  After all it was still in a pot and had been for several years.  Plus, my dad said that either he was dropping it off, or he was planting it.  When Mom and Dad dropped it off I could see that it wasn’t doing well.  Things were busy as usual and my rose bush hasn’t been planted yet, but here is the interesting part – It’s doing really well.  It is showing new growth and coming back nicely. 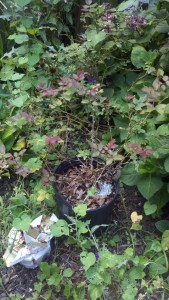 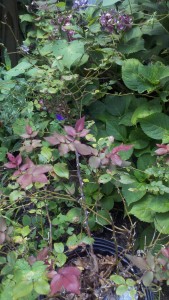 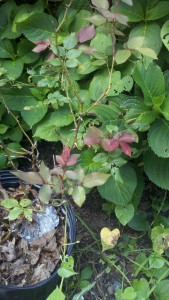 Home isn’t just a word – it’s pictures in your head, it’s memories of friends, it’s family surrounding you, it’s a rose bush, it’s about growing where you are and making it a home.

So after a bit of delibration and some weighing in of family and friends, I have decided to go  with the name – Homeschooler On the Edge!  Quite honestly, it just fits.  Homeschooling isn’t a calm and perfect journey, there are times when it is hectic and times when you feel just a little off balance, but it is the best journey – after all, you get to share it with your kids.

Anyway – I wanted to share the new name and new logo, but I am not going to stay too long – apparently allergy season is starting in PA, so I am a bit foggy with allergies and medication.  🙂  I will continue on the “Teaching with Tech” topic at the beginnign of the week.

For those who can’t wait – go and check out Andy – The Tech Homeschooler with the Old Schoolhouse Magazine.  Andy Harris writes the column “The Tech Homeschooler” and previous articles are posted at this site.  These contain all sorts of good information, including good free software, and educational online games.  Andy was one of the speakers at the Old Schoolhouse Expo.  Remember to check out their blog – Homeschooling with Heart – and sign up for this months event.  It’s free and they have lots of great information to share (plus there are usually giveaways!)

And if you want to know more about Schoolhouse Teachers (a division of The Old Schoolhouse) you can check them out here.  If you use this link and sign up that a portion of the proceeds comes to me.  Gotta love affiliate links!

So I have picked a new name! But I’m not going to tell you yet, as I still have to figure out my domain and if I tell you the new name you will think – “Oh that is soooooo cool! I just have to have that name!” So in order to save you from yourself – I can’t tell you. Really, it’s for your own good.

In order to get my site switched over I have a few things to do so I am not going to write over the weekend unless something totally awesome happens.  But I will be back bright and late (I don’t do early!) on Monday – with my shiny new name (hopefully)!

So the hardest part about writing each day isn’t the writing – it’s the remembering.  Not only remembering to write (which is hard enough), but remembering what day I am on.  Now I see why my friend Pamela did a monthly writing thing.  If you forget what day you are on, just look at the date and you will know.

OK – I just looked back, I am on Day 8 – yeah!  But I did miss a day in there – remember day 6/7.  In order to be proper and fair I think I have to start over.  After all – it’s only right to start over.  It has nothing to do with today being the 1st of the month and therefore making it SOOOOOO much easier for me to remember what day I am on.

Over the next few days I want to share a few of the things that I learned last night at an online seminar put on by the lovely people at The Old Schoolhouse Magazine.  Each month the Old Schoolhouse magazine does a free online event.  Last night (July 31st) the event was titled Teaching with Tech.  I consider myself a pretty tech savvy person, but I learned about so much stuff that I didn’t even realize was out there.  I heard about some other things that I already knew, but even with the things I knew about, there were still aspects of it that I didn’t realize.

Tonight’s blog entry is going to be short – the reason being the wonderful ladies at NewBee Homeschooler have already done all of the work.  I have been homeschooling for quite a while now so I don’t consider myself a “NewBee”, but these ladies have so much great stuff, it doesn’t matter.

One of the things I am most excited about right now is their free planner!!!  I have looked and looked and looked and looked for a planner that will work for us.  I am generally a paper person, but when schooling I feel the need to jot down things that we do so I can keep track.  These lovely ladies have created a great planner – and that is why I have to cut this short.  I have to go make mine!!!  I get to pick out my cover, choose which style of calendar pages, decide if I want lesson planning pages and how I want them laid out – as I said — EXCITING!

Oh – I just glanced back at the page – there is a section on dividers and page protectors!  Can you hear the excitement in my voice?  My computer can hear it because I am typing very quickly!

Now I know you are super excited to so I won’t keep you from it anymore.  You already know how to get to NewBee Homeschooler site – but here is the secret passageway to get directly to the planning page!

Free Curriculum Planner – 7 Steps – Start Here
And here is the blog of the cool ladies who run the site.  Thanks so much!

Now I have to run and work on my new planner!