If you live in Virginia odds are you have been to DC at least once, whether it was recently, or a while ago as a kid there are good odds that you have been there. If you haven’t I encourage you to do so – DC is a beautiful place full of monuments, history and culture. Let’s start with some of the monuments and memorials.

The Washington Monument – Whether you have visited DC or just driven by on the beltway, the Washington Monument is hard to miss. Standing at 555 feet 5-1/8″, this marble obelisk was built to honor George Washington. The monument was originally built in the late 1800’s, completed in 1884 and has undergone various restoration projects in the 1930’s, 1960’s, 1990’s and most recently 2011-2014 in order to repair some damage done during the earthquake on August 23, 2011. A notable fact is that the monument was built in two sections, the original section was built in 1854, but the monument society ran out of money. The second section which completed the monument 25 years later, however the marble for the second section was mined from a different quarry, while the marble closely matched at the time time and weather has caused the two sections to weather differently causing the two shades of color. My favorite part of the Washington Monument is actually the aluminum cap on the top. If you see the sun glinting off of the top of the monument, that is the aluminum cap. It isn’t easily seen and the inscriptions are unreadable unless you scaled the outside of the monument (which I don’t recommend). Why is this my favorite part? On the East face of the cap are the words “Laus Deo”, which is Latin for Praise God or Praise be to God. Personally I like the idea that God is on high in Washington – no matter what happens politically. You can visit the Washington Monument and even go inside, however tickets are required and are limited daily. Visit the Washington Monument Website to learn more about how to Plan Your Visit.

Plus at the National Mall and the surrounding Memorial Parks, kids can earn a Junior Ranger Badge and you can also find Curriculum Materials online.

DC Zoo or Smithsonian National Zoological Park – As a family we have visited the DC Zoo quite a few times. The DC Zoo really is a great place to visit. The animals have lovely habitats and the walk around the zoo (while it can be a little hard while pushing a double stroller up a hill) is nice. Admission to the Zoo is free, however if you want to park there there is a charge. You can visit the zoo by car, bike, bus, or metro and it is open 364 days a year – the zoo is closed on Christmas.

Here are some activity sheets that you can download – I found these links on the National Zoo Website, but I put them here to make it a little easier for you to find them.

The last time that we were at the zoo there was a discovery center in the back of the Visitors Center where the kids could take care of stuffed animals, build habitats, and be zoo keepers fixing meals.  I have looked and looked, but I cannot find anything about this on their website. So either, they are no longer doing this, or it’s not well publicize, so when you visit the zoo, go into the visitor’s center and ask about it. If it’s still there, it’s down the hall from the Gift Shop – if you find out, can you please let me know. It was really cool so I hope it’s still there!

Field Trip Tip – A fun way to get around DC and save on parking is to take the Metro. The metro allows you to travel from outside the city (from either your hotel or a parking area) to almost anywhere in the city. You will want to go online and familiarize yourself with the rail system if you are not already familiar with it, but it really is quite simple to use and it’s fun for the kids.

Here are a few other places that you might like to visit. Bear in mind that some museums, like the Natural History Museum, may have things that are not in line with your ideals and teachings, you can choose to either skip those museums or use them as a teaching experience.

Where you like to visit when you go to DC? Do you have a favorite place to stay? Have you seen the Marine Corp Silent Drill Team – they are amazing! How about visiting when the cherry blossoms bloom? I look forward to hearing from you.

This summer I went to several different camps with the kids.

Bug and I went to Cub Scout Day Camp. Bug has just become a Tiger Cub in Boy Scouts of America and his little uniform is so stinking cute! Day Camp was great in that we went each day for a week, coming home in the evenings to sleep, and then on the last night we took advantage of Scout Night at the Reading Philles. Scout night was lots of fun, we had a chicken dinner, watched the ballgame, then got our tent and slept out on the field overnight. 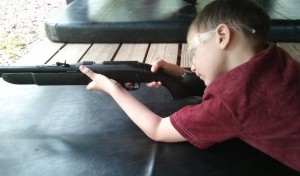 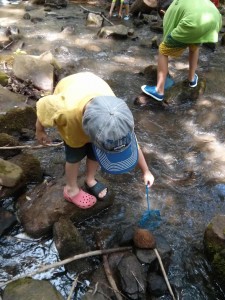 The reason that Bug is wearing a pink shoe is because we had to leave the house at 6 something in the morning to get to camp on time and that morning I could not find his other croc. 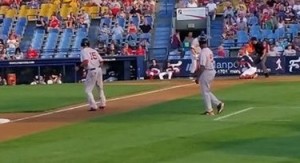 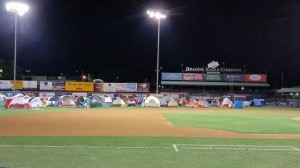 Then SixHands headed off to Boy Scout Camp for the week. While I am sure he can manage on his own for the week, we have a small troop so different parents take turns so that no one has to take a whole week away from home.  I was there from Wednesday evening until we headed home on Saturday.  The boys did great, as usual, and camp was nice. It actually got a little chilly in the evenings, and unfortunately as it had been warm last year I didn’t bring a big enough blanket. I had Bug’s sleeping bag planning on using that to lay on, and that one is kinda small.  I did have two extra blankets, but they were just throws that weren’t really big. Anyway – all of that to say – my boy is awesome. I had mentioned that it was chilly at night and the last night when I went to go to bed I found his sleeping bag in my tent. When I asked him about it the next morning, he said that he knew I said I had been cold so he left it for me so I could be warmer. I asked if he was cold, and he said ‘yes, but that’s ok’. Isn’t he a great young man! 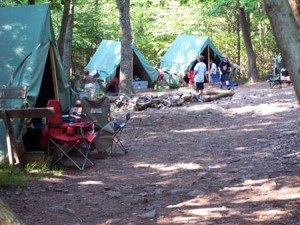 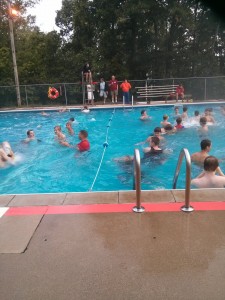 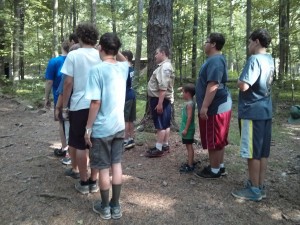 Next was Twilight Camp – let me say up front this camp was called Twilight Camp because it was in the evenings, at Twilight. Anyway, this was a camp for Girl Scouts and the theme was space exploration. We had a great time, I helped another leader (and friend of mine) with the games while Princess and her friend ran around and did all sorts of activities. Twilight camp is only in the evenings for a few hours, but they really did manage to do all kinds of stuff including art, science, games, launching rockets, and water balloon fights! 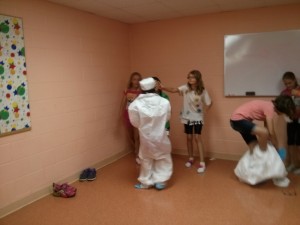 Our final camping experience was Bug, Princess and I along with some friends. Here is how this one came about. One friend’s daughter decided that she wanted to have a “camping” birthday party, but this mom needed another mom to be there as a second adult. So the second mom invited Princess and I to go along and Bug decided that if we were going he was too. Anyway, long story short here we are in the woods, it is myself, Princess, Bug, my friend, her two daughters plus one friend, the original mom, her daughter and 7-9 birthday party goes. 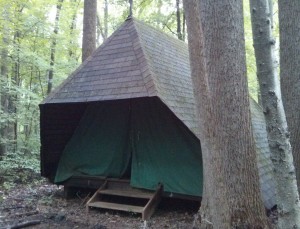 I will be the first one to tell you that I am not a girly girl. I don’t wear makeup, don’t really care what my clothes look like and I rarely wear dresses. Princess on the other hand, loves to dress up, changes clothes multiple times a day and has, on more than one occasion, came in with me when I was going to get dressed to “help” me pick out what would look nice. Princess also has a pet cockroach, likes to climb trees and has had more ER/urgent care visits than either of her brothers.

I tell you all of this so that you understand that I am not generally a major stickler for gender roles. I think moms can cut grass and fix things and dads can cook and change diapers. Of course I also think that Six Hands and my husband should have to take the trash out, but that isn’t as much of a man thing as it is a – it smells and I really don’t want to – thing.

However, going overnight camping with girls is a different experience than camping with either SixHands or Bug. First off, upon arrival we swept out all of the platform tents. This wasn’t to unusual as the tents had been sitting for a while. But then after finding a spider and a mouse nest in one of the tents (and cleaning it out) two of the girls decided that they were not going to sleep in that tent. We offered to sweep another tent for them, but the girls decided that they would rather sleep in the van. Later that evening, Princess’s friend decided that the tent they were sleeping in was too dark. Princess was willing to try, but after they talked she and her friend decided they were going to sleep in the van as well. So as the van was parked a little ways away from the campsite, my friend and I (and bug) had to go sleep in the van as well, so we didn’t leave the girls all on their own. Personally I would have preferred sleeping in the tent rather than the front seat of the van, but all in all it worked out ok and it was definitely a story to tell. Plus I was plenty warm this time as Bug wanted to snuggle part of the time. 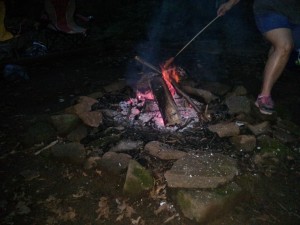 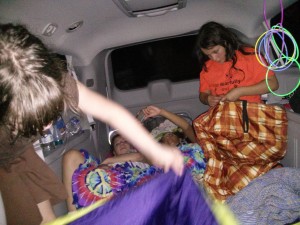 Needless to say we had lots of fun camping this summer – I quite enjoyed each and every time. Do you go camping? Do you go with a group, with family or on your own?