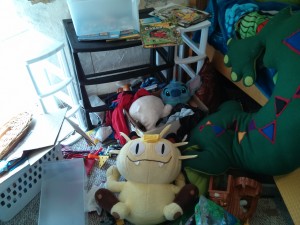 The black shelf looking thing is a three drawer unit – where are the drawers? Why they are stacked in the corner – empty – why? 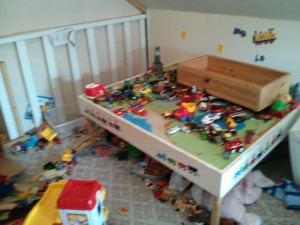 If it isn’t a train and doesn’t go on the train table – then it should be shoved under it – right?

For the last two days Bug has been asking me to help him clean his room.  I know I should be jumping at this chance and running up there with him.  After all – he wants to CLEAN!  We are in the process of decluttering and cleaning so his room was going to have to be done at some point anyway, right?

So why I am so resistant to the idea?  Because it’s been done before.  We have cleaned his room, more than once, and it always returns to it’s current state – stuff all over the floor.  We have too much stuff – we need to declutter – share – donate – get rid of – stuff.

UPDATE : So I have done things a little differently this time and hopefully it will make a difference in the long run.